Getting teeth is something that has taken longer than expected for John. John began getting teeth after his first birthday, which is considered to be delayed for children getting teeth. He got his bottom front two teeth in first which is the normal progression for getting teeth. He then cut the top front two teeth which is also a pretty normal progression. After the front top and bottom, he then cut the top side teeth but then has stalled We are still waiting for the bottom side teeth to fill in, however he has started chewing on things on that side of his mouth. So we wait in anticipation they will come.

As he got more teeth, his ability to eat a variety of foods from the table broadened. However, he is very picky about the textures of foods and refuses to eat most table foods that our other children were eating very well at this age. Although he likes and eats some table foods, he still relies pretty heavily on jar baby food for nutrition. His meals consists of:

We are constantly adapting to John's time as we are so programmed for milestones to happen just as we have seen from our other children. But we are continually learning that just as each child is different, John is no exception. Although his differences are a little more pronounced and often times ask us to step outside of our comfort zone. We are learning, however that when we do step away from what we accept as "the norm" for child development and work with him where he is, then he grows and matures just like my other four children - just at a slower pace.

We believe the Lord causes all things to work together for good to those that love him and we are challenged by God's gift (John) to us to "slow down" and stop pushing so hard.

May those of us with Ds children and non-Ds children as well learn to "slow down" and be content with a slower pace. Thanks for reading.

Posted by JaybirdNWA at 12:02 AM No comments: Links to this post 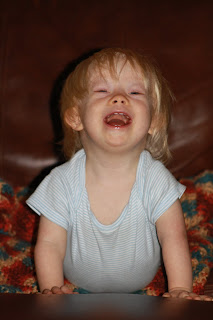 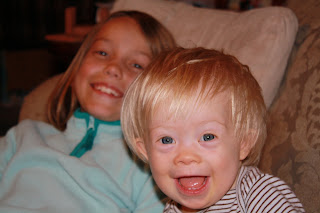 John is now 23 months of age is now working hard on walking independently. It has been very interesting to watch him as he has worked so hard on mastering this skill. He is very tenacious for which I am pleased the most for that characteristic. I think sometimes it is easier for children with disabilities such as Ds to give up easily because the skill is too difficult. As a Therapist and a parent, I believe that is where parents must be very involved in teaching the child not only the skill, but also the correct way, or should I say the more efficient way to perform the skill. 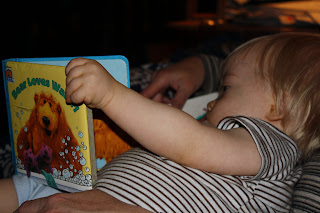 Although this is currently what John is working on, this has not come easily for John. Let me explain - when I stopped writing, John was still crawling with both legs out to side, or externally rotated at the hips. Seeing that this would develop into a larger problem with if not corrected, my family and I set out to help John to see that there is a more efficient way to crawl. 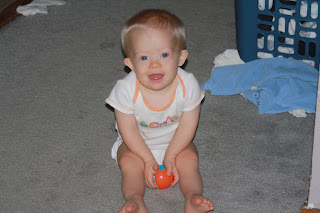 The therapy that was used to help him with this was to allow him to crawl up the stairs with our guidance. By crawling up the stairs, we would be with him making sure his hips moved his legs straight in up and down direction instead of moving them out to the side. This took extra effort on our part, but it paid off. Over the next 3 months, we noticed that John began to crawl by pulling his knees up under him. 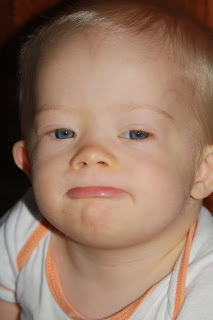 He then began crawling all around the house as we had to learn to put him down on the ground instead of carrying him. As a family, we noticed that it was much easier for us to carry him because it was faster for us. But this did nothing to motivate him learn to crawl or eventually walk. At first, he would cry and pitch a fit for us to pick him up. But with being consistent in leaving him on the floor, he eventually got faster and more efficient with his crawling. 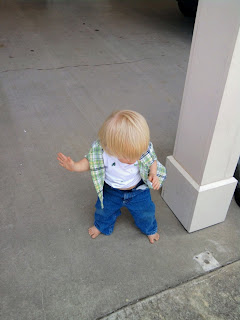 We are pleased that John has made the progress that he has made in this area. If I were to choose one thing that helped John achieve this goal, I would have to say that leaving him on the floor was a great motivator. At first, he didn't like it as much when we would leave him on the floor, but he now prefers for us to leave him alone and let him do it himself.

So let me offer the encouragement of letting them do it themselves even when they beg and pitch a fit, or despite the fact it would be much quicker to pick them up and carry them. You will not only be helping them achieve this milestone, but also giving them the quality of being able to stick to something until they have mastered the skill.