The Challenges of Having a 2 year-old...with Down Syndrome 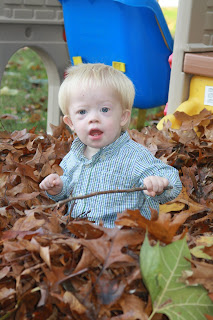 John is now 2 1/2 years old and acts more like my other children did at this age than he acts different. He throws temper tantrums when he doesn't get his way or when we say no to him. He has a definite opinion about what he wants and will let you know if it isn't delivered. He is walking everywhere, although a little stiff legged and unsure of himself. Still, he is determined to learn walking as he picks himself up from a fall and keeps going. He is able to climb and get to anywhere that he wants to go including climbing up on the top bunk of his brothers bunk bed if we are not paying attention to him. His brothers and sister help keep him motivated and also the neighbor kid down the street that is closer to his age. 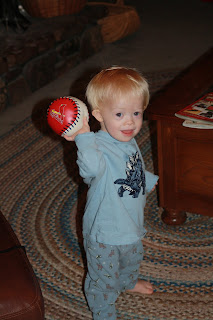 One of his favorite things to do is to take a bath. He loves to play with his toys in the bathtub and could spend a longer time in there than we allow. He really has some choice words for us (that are not understandable) when it is time for him to get out. It is pretty comical watching him but it has become a battle to let the water out of the tub because John has learned the function of the little stopper. We can pull out the stopper in the sink or pull up on the stopper in the tub and if we turn our backs, he will put the stopper right back to where that water is saved from going down the drain. 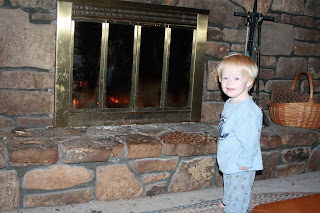 John is also acting more his age by eating everything in sight. His favorites are chips, whole bananas, hotdogs, pizza, and Chic-fila just to name a few of his favorites. He is now feeding himself and gets mad at us when we try and do it for him. John is a very independent little boy and for that we are very thankful. For the first year of his life, John wasn't independent and Joy and I had to waken him to change his diaper and feed him. What a different little boy than in those first months of life. 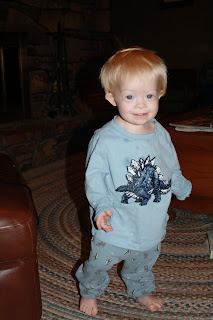 In those things, John is like any 2 1/2 year old. But the challenge for us has been his speech delay. John does make lots of sounds and does have about 17 words that he says consistently. But most things that he says, we just don't understand and that is a real frustration to both he and us. We are convinced that John understands things well enough to know that we can't understand what he is telling us which really angers him. For this reason, we have chosen to get him a speech evaluation which is another post by itself. I will just say to those of you considering this, be very selective in choosing a Speech Therapist. Ask questions of them and other patients of thiers if possible before you let them evaluate your child. Not all Speech Therapists or any other kind of Therapist are created equal when it comes to children. You will have a better therapy experience if you choose one that has pediatric experience. That is all I will say about that in this post. Maybe I will write another post about my thoughts and experience on that subject. 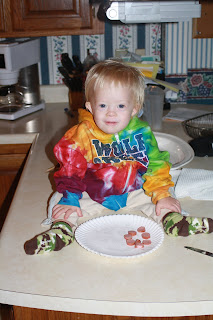 In all seriousness, his speech delay is our hardest challenge and that probably prompts us all to baby him just a little more than what we would normally. I love him more and more each day that I have him. It is very difficult for me as a dad though to not be able to communicate verbally with my son. I continue to pray that the Lord would give him speech. I know the Lord will hear my prayer and has a plan for my son that may or may not include verbalization. The Lord has blessed John with so much that we have more to be thankful for than not.

Thanks for reading and I hope that all of you are doing well and that your little ones are growing and learning and bringing happiness to you and others. I believe that that ability has been one of John's greatest purposes in life.

Posted by JaybirdNWA at 9:54 PM No comments: Links to this post