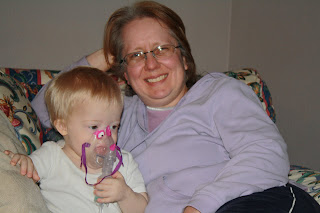 Earlier this week, we were reminded of the differences that work against fighting sicknesses when it was found that John had developed pneumonia. The differences that I am referring to are 1) low tone, 2) shallow breathing and 3) weak cough. These three worked against John this week as he was getting sick. He began with just a temperature but no real congested cough or snotty nose so we weren't they alarmed since we routinely give him breathing treatments anyway as a preventative. But with an elevated temperature, he wasn't drinking enough liquids and became a little dehydrated. The shallow breathing and decreased activity from being sick doesn't keep the lungs expanded as well as usual. The dehydration pushed him to where the mucus in his throat and lungs that usually get coughed up by you and I just settled in the lungs of a sick little boy with a weak cough. As a result, John was becoming infected by the secretions that he could not expel out of his lungs. By the time, we got him to the Dr's office, he was infected and has spread to his bloodstream.

John is now on the road to recovery without having to spend any time in the hospital but we are going to the ER everyday for a shot of antibiotic in addition to the antibiotic given orally here at home. The reason for both antibiotics is in part because of John's immune system is too weak to fight the strength of the infection and that the infection was in his bloodstream.

We have been reminded again this week of how quickly kids with Down syndrome can get really sick. Although, John is recovering now and has been eating and drinking well today, we are still keeping a close eye on him as well as giving him regular breathing treatments. This leads me to another thought - we are giving him breathing treatments because as we rehydrate him, the mucus in him lungs become loosened and need to be expelled. Since John has a weak cough, the breathing treatments help him to cough and bring up the mucus.

But most of all, we are thankful to the Lord for giving discernment in knowing when to take him to the clinic and to the Drs and nurses at Mercy Pediatric Clinic for giving him the care and attention needed. It really helps having a Physician that knows your child and is familiar with Down syndrome.

Posted by JaybirdNWA at 6:41 PM No comments: Links to this post

Since both Joy and I work, John has always been babysat by a friend in her home. Recently though, our babysitter has started taking her son a couple of days a week to a church sponsored daycare here in town. Joy and I had expressed some interest in startin John in a daycare program but wasn't really sure if we wanted to send him to a special needs program or not.

We agreed to send him to the daycare where our babysitters' little boy goes, not really knowing how John would respond but with hopes that John would adjust well. And the adjustment has gone very well. The other children in the daycare have responded well to John and he has learned so much from them.

He lines up with the others and has learned to wash his hands under the sink and sits in his little chair at the lunch table very calmly and eats his packed lunch. To our surprise, he has even learned to go and get his pillow from the closet and take a nap with the others after lunch without being coaxed.

We are thankful that John has adjusted so well to his new surroundings, to the other children and they to him. I realize that each Ds child is different and face different needs but integrating our children with society often times challenges them to learn new skills.

Taking a step like this may be scary for parents of children with Ds as we weigh all of the pros and cons of whether or not to keep them with their counterparts. But we have had a great experience with this step. My advice is to know your daycare and staff. Know your childs schedule at the daycare and try to work with your child on the same skills as the daycare is asking of them.

Posted by JaybirdNWA at 11:23 PM No comments: Links to this post

John is now unstoppable. He has found his legs and is constantly on the move. Just as with any 2 year old, he is into everything and thinks that he can and should be able to do everything his siblings do.

His newest skill is running. He loves to run, especially when he has something that he knows he shouldn't. He has great hip rotation which is a problem with children with Down syndrome. If you remember, the way that we confronted this issue is stair climbiing (let me know if you would like to know more about that part of therapy).

We are working on mouth and tongue movements, especially sucking through a straw. A couple of the ways we are approaching this is to use a sippie cup with a valve, and to use a short straw. He seems to do better with a short straw as he doesn't have to suck as powerfully. And as he improves, the length of the straw gets longer, therefore and hopefully increasing his suction power.

His eating has greatly improved. However, he doesn't like anything chocolate which is strange for a little boy but then again, we are all different. Among his favorite foods are vanilla ice creem, french fries, yogurt (I still feed him Brown Cow which is high in fat), chicken, green beans, and green peas.

He still drinks from a bottle when he is tired, otherwise he used a sippie cup with a valve. The valve encourages him to suck and it also prevents messes. He is drinking whole milk instead of formula consistently now and has been for the last 4 -5 months.

I don't get on hear as often as I would like but still like to update you all with what is going on with John and how we are dealing with his syndrome. May this be an encouragement to all new parents of children with Ds that these children are wonderfully gifted children and can learn to function in the world. My family would be lost without John as he has been a blessing and complete joy to have.

Often times the medical community paints a dismal picture of children with Ds which cannot be taken generally as each child is different. As a Christian and a believer that we are all fearfully and wonderfully made with a purpose, we believe that each child should be given a chance to thrive and succeed in life. And that is what we are doing here - giving John the best opportunity to thrive that we can give, most of which is our TIME. May God be with each of you as you raise and make decisions on how to best interact with your child.

Posted by JaybirdNWA at 4:52 PM No comments: Links to this post