This is definitely not a completed list. But there are many more similarities than there are differences between John and my other children. All too often, we (my wife and I included) react negatively to these children because we think that they will require more time, money and effort. That may be true for some, just as there are non-Ds children who would fall into the category. But I can tell you that after 10 months with John, things have been more of the same little baby than have been different. I hope that has been true for you.

And for those of you that are looking toward a life with a child with Ds, I hope that you are able to take a little comfort from these words. They are truly worth the little bit of extra effort and do not deserve abortion. They will have a positive change on you and your families life.

Posted by JaybirdNWA at 11:29 AM 7 comments: Links to this post

Pictures of My John 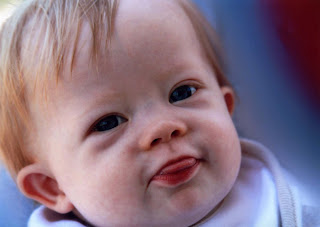 OK, I should know better than to make a post after a month away without it saying anything about John, but the previous story just hit me hard and I had some thoughts to get off my chest. Thanks for indulging me.

John is doing very well. He is now mobile and we are learning that we desperately need to keep everything off the floor. He is not crawling on all fours yet but he manages to commando crawl to where ever he wants to be pretty fast. He has started to put his knees up under him and get his belly off the floor some of the time but he moves a lot quicker commando style. I am also working with him on standing and sit to stand. This is mostly to teach him the proper mechanics of this movement while also allowing him to bear weight through his hips and legs. 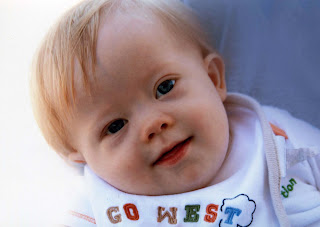 My other children are out of school now, so John has lots of entertainment and opportunities to learn more things. He does not have teeth yet, but we are praying they break through soon which would make our life a lot easier at the table. His appetite is good but he is limited in what he can eat without chompers which is difficult for him and us because he wants desperately to eat what we are eating.

I hope that everyone is doing well. I have enjoyed my break from blogging as it has helped me to refocus on other things. But I have missed reading about your wonderful children and writing about my John.

So, here are some updated pictures of John that were taken by a friend of ours whose child is in the same school classroom as our daughter. She had a field trip one day and John and my wife went and had a fun time with her (and evidently with the camera). Thanks Wendy for the pictures - we love them. 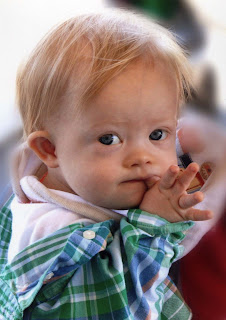 Posted by JaybirdNWA at 10:28 PM 10 comments: Links to this post

As I reflect back on the killing of one of the few abortionist who provided abortions in the third-trimester, I am reminded of just how far off-course mankind has come. To take something so blatant as mutilation of a 22 - 40 week old baby, and it is a baby at that point, and treat it as if it were just another day at the office is beyond anything that I can comprehend.

When I let my mind think about these things, which I have a lot this week, many questions come to mind. One is the question of why the contradiction of our laws regarding the taking of life. We put to death a man or woman who is found guilty of killing someone with the intent to kill and we have ruled that putting to death another for the sake of giving them relief from a terminal illness is unlawful. But yet we allow Doctors, of whom I might add have taken an oath of "never do harm to anyone" and "I will not give a lethal drug to anyone if asked, nor will I advise such a plan; and similarly I will not give a woman a pessary to cause an abortion", to lawfully and legally take the life of a baby who has a beating pulse, recognizable face, lips, 10 fingers, 10 toes, 2 ears, 2 eyes, 1 pair of eyelids, 1 pair of eyebrows, 2 arms, 2 legs, the formation of vital organs, and a beating heart just for the mere reasoning that the Mother doesn't want it.

How can this be justified? Why do we apply the law for one group of people and not another? Have we given great value to those that can speak or think for themselves?

Another question that has plagued me this week is where are we as Christians and people who frequent church, where the Bible is supposed to be taught, when it comes to this subject. We are obviously absent seeing as how this man was a religious man who frequented church and where his wife sang in the choir. Have we gotten used to abortion so much that we no longer see it as taking the life of another? How could this man have been allowed to continue practicing his murderous deeds and still maintain his religious life? I know that we as Christians are called to forgive, but I also believe the Bible teaches that a person can reach the point of unforgiveness if that sin is unrepentant and becomes a part of their life.

So I believe the implications of this are negative for the Christian church and should be a wake-up call for us and for our Christian leaders.

When I look into the faces of each of my 5 beautiful children, I can't imagine ever intentionally robbing them of the life that I chose to give them when I implanted my wife with my seed. So I ask: are we confused? We choose to kill what we have chosen to give life.

Below is an ultrasound of a 20-week old baby. The age of gestation in which Dr. Tiller is said to have aborted babies is 21-weeks and beyond. I know that I should feel compassion and sympathy toward the Tiller family. But frankly, I find it difficult to have that attitude toward a family or a church who would condone such atrocities. 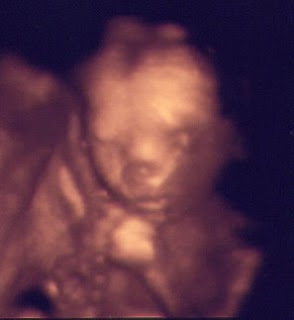 Posted by JaybirdNWA at 10:57 PM 7 comments: Links to this post