Life Is a Big Classroom

John is 4 now and continues to learn so much from his family and the preschool that he attends 3 days a week. He enjoys hanging out with his brothers and sister and trying to keep up with them but he also needs the structure of being in a classroom with other children his age and learn how to follow the rules of the classroom such as staying seated, sharing, treating others nicely, etc. Although John is delayed, he can learn and learn at his own pace and part of raising a child who is delayed is learning to adapt to their schedule. This has been one of the most difficult things for us to learn probably because we are so programmed to one schedule for everyone.

Some of the things that I have seen John learn these past 6 months is jumping, riding his foot-powered car, expand his appetite for new foods, obey, fall asleep in his own bed, clean up after himself.


John has been going around the house jumping so much that we decided that the boy needed a trampoline to help him. So we got him one of the small trampolines with a net enclosure that he can use all he wants. He loves going to jump. Right now, he can walk on the trampoline without falling which is a great way to help improve their balance while building up the muscles in their legs.

Learning to make his car go by doing the walking motion has really helped build muscle in his legs. He still prefer to make the car go backwards which is easier, but he has learned to make the car go forward and can keep it going for about 50 feet before stopping.


We have been consistently introducing new foods to him. Some he will try and some he will not. Sometimes we try to bury it in other foods that he likes. We are finding that often he likes it if he doesn't have a chance to see the food first.


Falling asleep in his own bed has been a difficult task and has not differed that much from our other children. This has been as hard for Dad and Mom as it has been for John. It is much easier and more fun to hold him while he falls asleep. The warmth of his little body and how he molds to your body just makes you want to hold him. But we are learning that he has got to learn to fall asleep in his own bed. So after occasionally letting him cry himself to sleep, he will now ask to go get in his bed if he is ready to go to sleep.


Just as I have said before, I am learning that these children have the capacity to learn just as our other children do. They just are on a slower schedule. Often times, how our children perceive themselves depends upon how we as parents accept and adapt to their schedule.

I hope that you and your family are able to see your little Ds child as a blessing and not a hindrance. Yes, they do slow you down at times but sometimes we need to stop and ask ourselves why are we in such a hurry? Slow down and enjoy your little one, they will get it and you will learn a valuable lesson in the mean time.


Here are some pictures of John and two of his favorite things: playing cars and his dog. 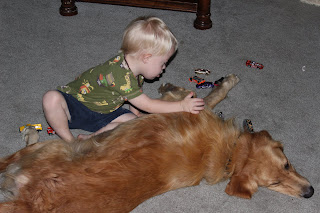 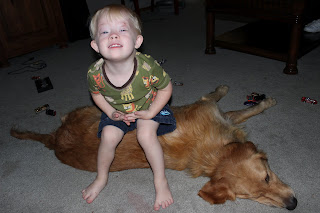 Posted by JaybirdNWA at 10:48 AM No comments: Links to this post